The Shit No One Tells You About Severe Pregnancy Sickness 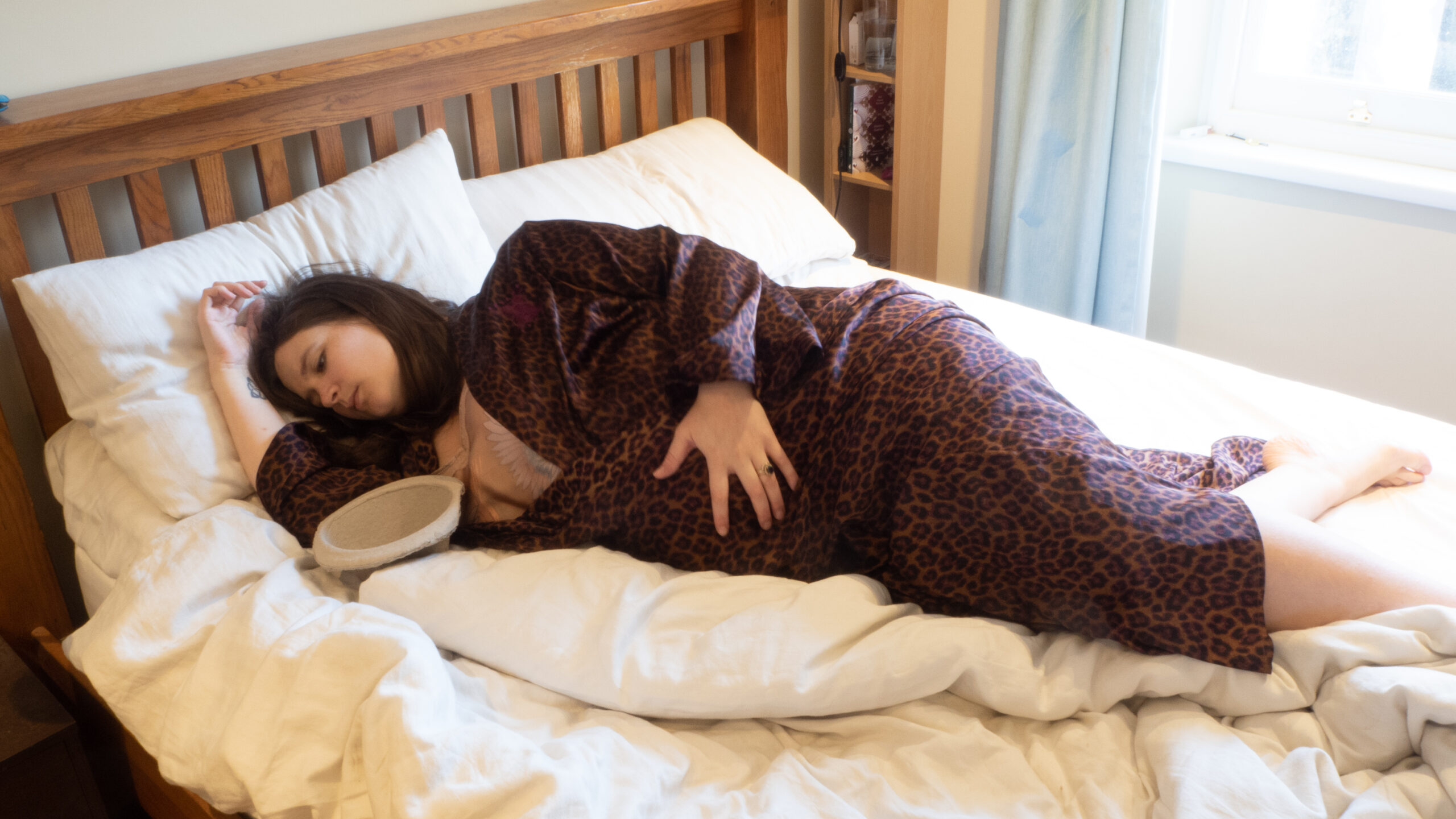 This isn’t just morning sickness, this is M&S morning sickness. Well, times 100000. Hyperemesis Gravidarum affects 1% of pregnant women, and Charli is just one of them. She talks hospitalisation, heightened senses, and best of all? Hope.

This story is brought to you by Charli, a 30-year old mother and body confidence champion who you can find over at CurvyGirlThin.com or @curvygirlthin on Instagram. She’s still pregnant, so try not to scare her too much with your toddler stories just yet! (And yes, that’s really her feeling nauseous in the pic above. Glamorous pregnancy photo or WHAT?!)

If your morning sickness is extreme or you’re really struggling with it, get help. Speak to your midwife or healthcare professional as soon as possible. They’ll come to you if necessary, so don’t worry about travelling to a doctors surgery.

“We’ve all heard about morning sickness. A nauseous feeling at the start of pregnancy with the occasional mad dash to the toilet to purge yourself of whatever offensive item you’ve just eaten. The majority of women will experience morning sickness – although it is a complete myth that it only happens in the morning. But what happens when you start vomiting up to forty times a day? When the sickness becomes so severe that you’re unable to even keep down the smallest sips of water? Well, I’m here to tell you!

1% of pregnant women will suffer from a severe pregnancy complication known as Hyperemesis Gravidarum. You may have heard of it; Kate Middleton has suffered from it through all of her pregnancies. Amy Schumer was also affected by it. It’s a condition that, until a few years ago, was rarely spoken about. Women suffered in silence behind closed doors with little to no support. Rewind to the days before anti-sickness medication and the condition likely ended in death. Even today, around 10% of women suffering from this condition choose not to continue with the pregnancy. It is a devastating illness that leaves the sufferer almost helpless and places incredible strain on those around them… much more than a bit of ‘morning sickness’.

I am amongst the 1% percent and, although everyone’s story will differ, this is the shit I found out when suffering from severe pregnancy sickness.

I started to feel ill at two weeks pregnant. I was dizzy and a little nauseous, although I had no idea this was due to pregnancy. At three weeks pregnant I lost my balance walking the dog and hit my head. The nausea got worse and I put it down to the bang to the head. At four weeks pregnant I made myself a cup of tea and immediately threw up in the kitchen sink – I knew that moment that I was pregnant.

The nausea and the sickness continued to get worse. By six weeks pregnant, I couldn’t stomach any food, and even the smell of someone else eating or cooking in the house would cause the sickness to start. I was unable to keep down even small amounts of water. I spent a night vomiting uncontrollably; simply moving my head on the pillow would cause fresh waves of uncontrollable sickness. I was rushed to hospital, but my dehydration was so severe that my veins were collapsing making it difficult for them to get the much-needed IVs in place. When bloods were taken, they clotted too quickly to be tested and my kidneys started to shut down.

I was diagnosed with Hyperemesis Gravidarum and that I would need to take strong anti-emetics if I wanted to continue with the pregnancy. I was given hope that symptoms may get better at twelve weeks pregnant. The medical advice was not to eat anything more than a cracker or digestive biscuit and only when I felt up to it, and to drink very strong lemon squash to help with the taste and my dry mouth. I went back to hospital regularly for fluids and nutrients to be administered via IV and sucked on frozen lucozade cubes to get the electrolytes I desperately needed.

Twelve weeks came… and I didn’t get better. At 24 weeks I was able to drop one of my anti-emetic medications, but by this point I had lost over three stone and still didn’t look pregnant. At 32 weeks, the sickness worsened again. By 36 weeks pregnant, I was taking three anti-emetics and still vomiting daily but I could function.. ish!

And the baby? There were some concerns initially that it was a little on the small side, but those concerns later eased. I have an incredibly wriggly, active baby happily bouncing away in my belly, regardless of all the illness. This is often the case with Hyperemesis: the baby is fine, tt’s just me with the issue!

Issues with food are just the tip of the iceberg.

Everyone assumes that pregnancy sickness is entirely related to food. Although food is a major issue, it’s not the only thing that induces sickness. I found reading a trigger; concentrating on a page would worsen my nausea. I also suffered severe travel sickness, and found moving made me sick. Even watching TV made me ill – the moving images on a screen were just too much.

Pregnant women often have a heightened sense of smell – women with Hyperemesis basically have super-human smell!

Severe pregnancy sickness is more than just nausea (although there’s a lot of it).

In my case, the sickness meant I couldn’t eat so I became malnourished. With that comes low blood pressure and low blood sugar, making fainting a risk. I still carry a little card with me explaining the issue because I have a tendency to faint in public. Exhaustion is also a major issue – I could barely stay awake for more than an hour and have spent weeks barely able to get to the bathroom unsupported. Dehydration headaches are excessively painful, making even sitting up difficult. My bowel system essentially shut down from inactivity and, once I ate again, meant I was almost entirely dependent on laxatives to keep things moving. The condition put me at high risk of blood clots and it’s not uncommon to have investigations into blood clots on the brain and lungs as a result.

People just don’t understand Hypermesis. I’ve had friends and family members just shrug it off as ‘normal morning sickness’. I spent the four months of my pregnancy pretty isolated, only seeing my husband and health care professionals. My own family don’t live close and my husband’s family just didn’t visit. Ante-natal depression is well known to accompany Hyperemesis and I spent most of my waking hours in tears from feeling so weak and so alone.

It can be really difficult to enjoy your pregnancy.

I’ve really been too ill to enjoy pregnancy. At times, I haven’t felt well enough to continue the pregnancy and I seriously considered termination. Hyperemesis has meant I spent pregnancy convinced something else would go wrong, but also I resented how poorly it made me feel. I do love this baby now – but I would never go through pregnancy again as sadly, Hyperemesis often reoccurs in subsequent pregnancies.

There is help out there!

My midwife referred me for counselling, and there is a charity set up specifically to support women suffering with Hyperemesis. Pregnancy Sickness Support  offer advice, support, and someone to talk to, and can even pair up sufferers with other women who have experienced Hyperemesis. They’re

I remain positive that it will get better. Hyperemesis doesn’t usually persist after birth, and many women report the sickness leaving within an hour of delivery. I really hope this will be the case with me so that, even if I couldn’t enjoy my pregnancy, I will at least enjoy time with my newborn. I can’t wait!”