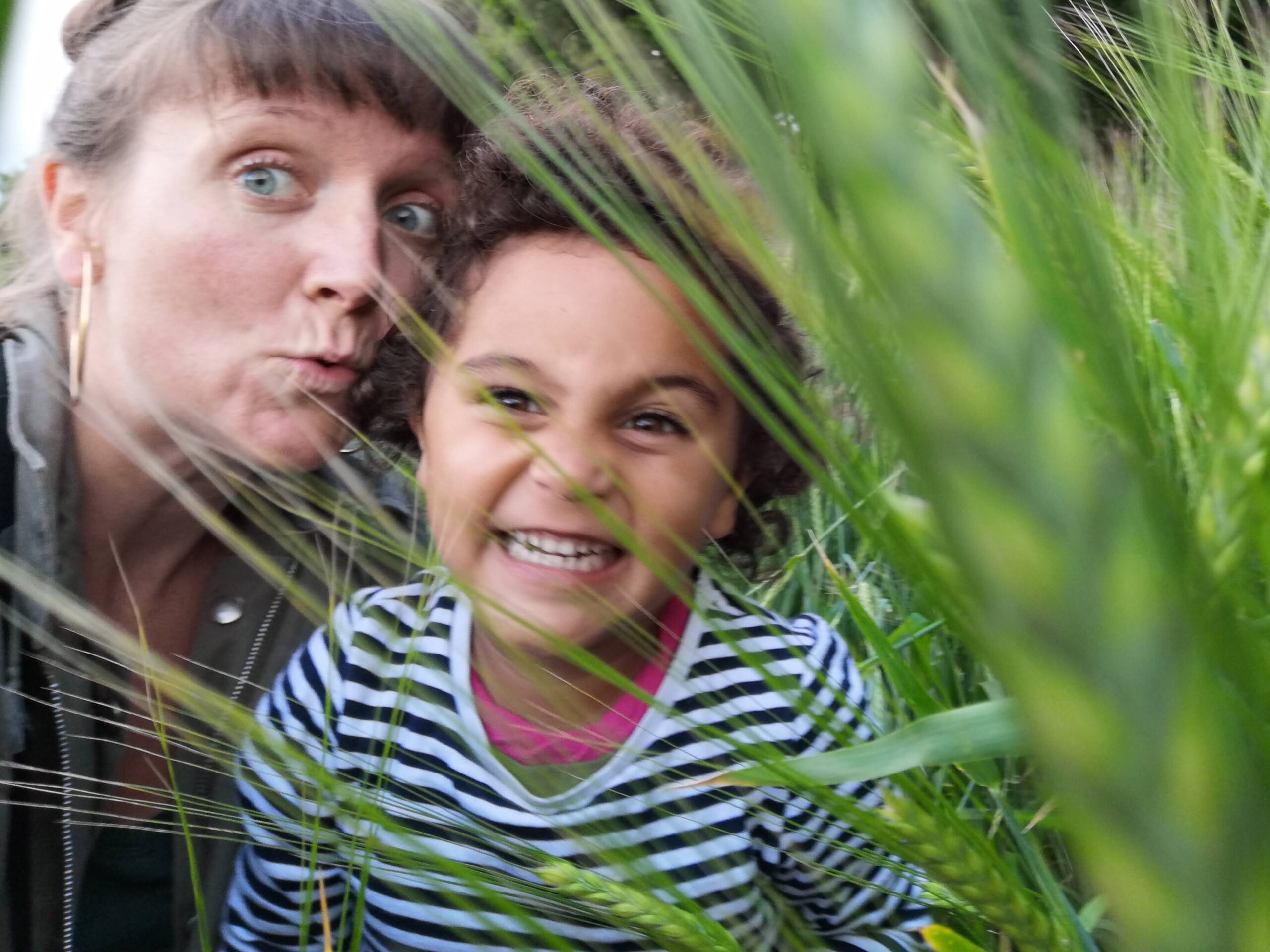 Mixed heritage people are one of the fastest growing demographics in the British population and can face unique challenges and racism. As children, mixed heritage people may not be considered easily identifiable as the child of their parent/s upon first glance – spurring on a whole host of (often unwanted) questions, commentary and critique.

Adele became a mum to a mixed heritage daughter with her Black partner in 2016, and here she talks through her experiences, and things she’s learnt, through raising her daughter.

Adele is also an author, and you can pre-order her book, Children Don’t Dissolve In the Rain, now at bigblueplay.org, before its release on 1st July 2021. You can also catch her on Instagram at @adeleplayworker!

For more resources on parenting mixed heritage children and race identity, you may find the Mixed Up Mama blog, the Metro Mixed Up series, and the Dope Black Dads podcast helpful. You can find specific anti-racism training and consultancy information from Liz Pemberton, aka The Black Nursery Manager.

“Growing up in a diverse neighbourhood, in a multicultural city, with friends ranging the full Benetton spectrum meant that I thought I had already heard all the shit my friends and their parents had faced about being mixed race*. Seemingly not. I fancied mostly white boys when I was a teenager so I wasn’t making notes for the ‘brown babies’ I was planning in the future; unlike plenty of others I knew. But low and behold, I have found history repeating itself. Those stories from Birmingham in the 80s and 90s were still a reality when I became a mama in 2016.

*In the 1990s ‘mixed race’ was widely accepted, but times are indeed changing and I respect that the new generation are calling for ‘mixed heritage’ because we are one human race. We are all learning. I’m using the term mixed heritage for my children as that’s what we use as a family and what we’re most comfortable with.

It’s not uncommon to be questioned on parentage.

First and foremost, in twenty-first century Britain, I thought we were over that ridiculous expectation that every child must resemble their parents. But time and time again I have been asked “is he yours?”, or “are you his nanny?”. Skin tone aside, my child is my daughter, but not dressed head-to-toe in pink or adorned with bows in her hair, so people assumed she was a he.

I have always responded with “yes, I gave birth to her. She is my daughter”. Needless to say, her Papa has never once been asked by a stranger if his accompanying baby belonged to him.

Colourism is a thing, even for children.

The fetishisation of mixed heritage children is very, very real (hence my previous ‘brown babies’ comment). The majority of our pre-parenthood friends were in mixed heritage relationships so the thought of being surrounded by ethnically mixed children has always been normal to me. However, at our local baby groups my daughter was immediately labelled “exotic”, “cappuccino” and even “half-caste”; the latter of which is a label I absolutely hate – my child is not half of anything and I will not have her wholeness belittled. My daughter’s eye colour, skin tone, button nose, and (later) her curly hair have all been commented on by white strangers to her white mother. I can’t speak for all white women of mixed heritage babies but I certainly felt a disproportionate interest in my baby’s looks, compared to other white children in the room.

By all means, sure, sit in awe at my child’s cognitive development, her smile or her bilingualism, but not her appearance. How shallow. The handful of times I encountered mums of colour at baby groups, I didn’t hear the same comments about their children. Similarly, my husband didn’t receive the same comments in the same groups. It was only when a parent of contrasting skin tone was present that anyone felt the need to comment at all.

From cute to criminal: Black and mixed heritage children are judged in a different way the second they start ‘growing up’.

“I always wanted a chocolate baby!” one woman at baby group declared to me once with a beaming smile. I was tired, and hormonal, and almost lost my shit with her but only managed to respond with “no children are made of chocolate”. It was one of those situations where for days after, her stupidity, and my lack of strong response, sat with me. I felt as if I should have had a speech prepared, something profound to challenge her ignorance, but I didn’t. I just sat and gazed at my incredible child and held back the tears.

What people don’t seem to consider is that the mixed heritage babies seem to think of as extra cute are later and thought that women had no idea that in a few years’ time these “cute” little babies are more likely to become the victim of bullying and hate crimes, or assumed a criminal because of their looks. I dread the day we go to a playground and my daughter gets picked on for looking different. I subconsciously scan the crowd at every playground we visit to see if she is the only non-white child there. If she is not, I feel myself relax a little. And if she is the only one I thinkplease don’t let today be the day it happens. At some point the ‘cute’ tag will disintegrate in other people’s eyes – and there’s simply no way of knowing when that will be.

Moving to the south coast of England was a huge culture shock for me; it was the most English place I have ever lived. In the two years before our daughter was born I came across the most ignorant and casually racist mind sets I had ever encountered. The anti-Black messages rang alarm bells for me; this was not a narrative I was brought up to tolerate. Myself and my partner were never specifically targeted (that we know of), but the casual racism heard in shops and from colleagues was disconcerting.

On more than one occasion, my Black Portuguese husband and I seriously considered moving to a larger city just to have more diversity on our doorstep. In the end, the thought of raising a family at the seaside was so idyllic, and was our dream – so we did decide to stay put, regardless. Yet this move isn’t something everyone could have understood. I’ve only ever heard white parents talk about moving to a certain neighbourhood for school catchment reasons, not to avoid racism. Straight, white, neurotypical, able-bodied British families don’t often have to think about relocating to avoid prejudice; but this can be a serious consideration when raising children of colour.

I am not usually someone who feels judged or cares much about the opinions that others form of me. I’ve never fit a mould and am quite comfortable with my non-conformist ways. But through raising a Black child, a quiet hum of paranoia has sat with me; and a lot of it revolves around hair care. Throughout my teens at school, I heard lots of stories around the maintenance of Black hair and watched lots of my friends braid their own and each other’s. There was always an undercurrent of standard teenage bitching around girls who looked as though they didn’t appropriately care for their hair. Since then, I’ve noticed an insecurity deep within myself that my daughter’s hair needs to be neat and in good condition all the time – or I’ll be judged by others for it. This definitely manifests itself in my daughter’s look. I defend her right to play and the rest of her can be as scruffy as she likes, but when it comes to her hair, I feel a huge responsibility to look after her curls properly and style them just right. Judgment comes from the Black community as well as the white, and it can be difficult to navigate where to ‘fit in’.

Just last week, now four years old, my daughter turned to me and asked “Mama, when I grow up am I going to be a Black woman?”. This is a very valid question, with no single answer. Realistically, my daughter’s facial features won’t allow her to count as ‘white passing’, but there’s equally no guarantee that the Black community would accept her either. While her bilingualism will open doors in some senses, but in other her mixed lineage will alienate her. I have no way of knowing where she will that she belongs best, but I can’t allow myself to worry about it.

I’m optimistic for my daughter’s future. The rise of Black Lives Matter and associated campaigns and causes, though heartbreaking and exhausting, has been a much-needed wake-up call for so many. Anti-racism has suddenly become mainstream, and for the benefit of future generations including my daughter’s one, I hope it stays that way.”