Wonky heads and wacky helmets: Our difficult but definitely worth it plagiocephaly journey 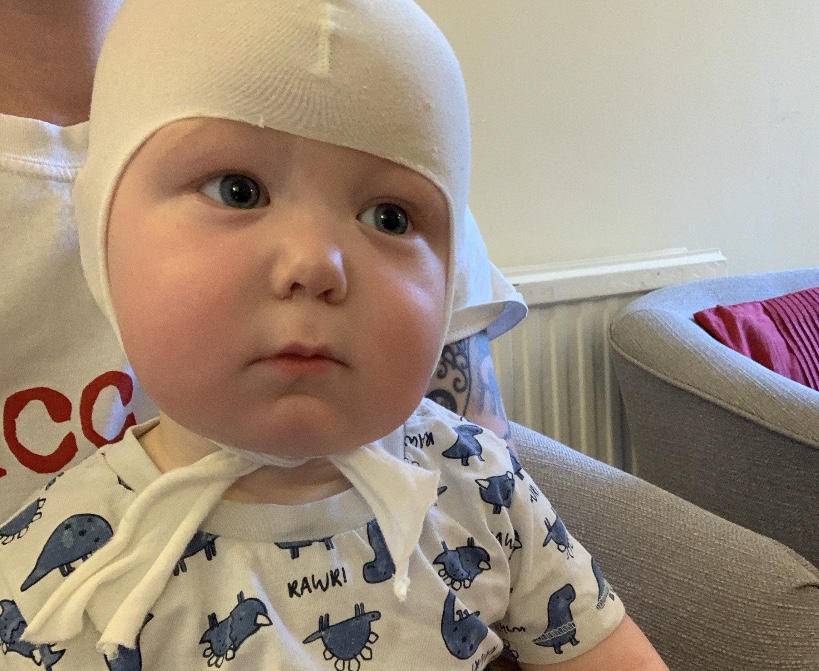 One of the most noticeable things about my son was, for a long time, that he wore a corrective helmet. The helmet was for plagiocephaly (flat head syndrome/a wonky head!). Now that he’s no longer wearing it, it feels like the right time for me to write about our treatment journey.

This blog contains my experiences and includes medical themes. This is purely based on medical information supplied to us regarding my son – but, duh, all children are different. Details here may not apply to anyone else. If you think your child has plagiocephaly, brachycephaly, torticollis or any other cranial condition, seek professional medical advice.

Plagiocephaly (pronounced pla-jee-oh-seff-aly) is a form of flat head syndrome, where a baby’s skull is flat on one side. This can be caused by a few different things. In my son’s case it was because of his foetal position, prematurity and a lack of neck strength. He’d been tucked up hidden inside of me in a position which wasn’t ideal for growth, PLUS he was premature and so born with an extra squishy head, AND he couldn’t hold his head up for months, so his head naturally flopped to the side for a long time. A trifecta of causes!

Plagiocephaly isn’t dissimilar to brachycephaly (pronounced brack-ee-seff-aly), where the back of the head is flat. Helmet therapy is often used for this too.

Uh… does my baby have a flat/wonky head?

My son was just a couple of weeks old when his plagiocephaly became evident. If you compared photos of him taken from different sides, he looked like two different babies. Within a couple of months, you couldn’t see both of his ears from looking at him front on. His skull was growing to a point at the back and his head had one ‘flat’ side and one ‘fat’ side. By six months old, his skull was so asymmetrical that he was unable to rest on the ‘fat side’ of his head and he couldn’t find his balance to sit up.

We raised this with Health Visitors and GPs, but were told to try and flip his head to the rounded side as he slept. We tried, but that was basically fucking impossible as we’d have to sit with our hands wedged under his head. Introducing a positional sleeping pillow was suggested, so we gave it a go, but the deformity was so bad that this didn’t work either, so… we knew we needed to do something else about it.

The NHS advice on flat head syndrome is (as we’d been told) simply to reposition the head. This wasn’t possible for us. Unfortunately, the advice also states that the problem is just cosmetic. In our case, the deformity was so severe that we warned not acting could cause pressure on the brain, seizures and a permanent lack of balance with related developmental issues.

There is no NHS treatment available in most areas, including where we live. After a heart-to-heart with a very generous family member who said they would pay for treatment, we went private. This wasn’t a decision we took lightly, as we’d never paid for healthcare before and this wasn’t a cheap or easy option. It cost £2,000 for a custom-made helmet and treatment, as well as repeat travel costs to and from our nearest clinic. In our case, this was over an hour away in Cambridge.

If your child has plagiocephaly, brachycephaly or torticollis and needs helmet treatment, don’t panic. If you’re unable to raise the funds, there are two charities that can help: HeadStart4Babies and Tree of Hope. Contact them for bespoke advice on your situation.

It was a big decision to make, but we booked a free consultation and went to visit a cranial orthotics clinic to see what we made of it.

I didn’t really know what to expect when we arrived for our first appointment with the London Orthotics Clinic but was quickly at ease. I knew my son’s plagiocephaly was bad, but I had real imposter syndrome; convinced that I was over-exaggerating it, focusing on how much worse other people may have it, and worrying that I’d be putting my baby through pain just for cosmetic purposes. He had measurements taken and a 3D scan completed, and it was confirmed that his cranial asymmetry was 21mm off centre. 21mm was ranked as off-the-scale severe (severe was classed as 12mm), with ears completely misaligned and no chance of it ‘getting better with time’. This put to bed my worries and proved that I wasn’t been pernickety… this shit was real.

We opted for helmet treatment and within a fortnight had a custom-made helmet ready for wear. The helmet was made based on 3D scans of his skull, allowing the flat side of his head to grow and restricting the growth of the fatter side. It didn’t push on it, or cause pain, and we eased into the wear with just a few hours a day. Eventually, we worked up to 23hrs a day of helmet wear.

Corrective orthotic helmets are made of foam, which is gradually shaved away on the inside to accommodate the growing bonce. Eventually, the skull fuses and no further work can be done, so the treatment ends. The helmets mustn’t get wet (so you whack it off for bath-time and messy play) and the clinic we used offered a range of free designs. Incidentally you can get helmets custom-painted with funky designs on, but it’s expensive… and we didn’t have the money or the time to invest.

My little man didn’t seem bothered by it at all as we started increasing wear time. We returned to the clinic every week, and once he was a little more settled, every fortnight and eventually month. This was something that I hadn’t considered. Finding a way to get to another city every month wasn’t cheap or easy, and that’s before you need to entertain a toddler for the trip! The added expense was worth it, in the end.

(If you’re in Cambridge for lots of these trips, I’d recommend visiting the Central library and Jesus Green playpark. Also, both Pizza Hut and Brewdog are child-friendly for food.)

Living with a plagiocephaly helmet

Return trips to the clinic involved skull measurements and scans to monitor progress. Results were pretty quick and we hit as much as 4mm correction within a month! Meanwhile my son’s increasing balance allowed him to sit up, crawl and walk; which were milestones I’d been worried he’d never hit.

There were a couple of super hot days in the summer when we had to go helmet-free, but it was on almost all of the time otherwise. The little man started nursery but with a risk assessment completed and on and off demo given to the staff. Life went on as normal.

I hadn’t ever considered how people would react to seeing him in the helmet. I was too wrapped up in worrying about him! Initially, reaction was really positive. I had people even approach me in the street to ask about it (which is fine by me, I’d prefer you asked than just glared or pulled your kids away). Most people seemed to assume the helmet was for epilepsy or seizures. Some thought it was purely a crash helmet! There was the occasional double take and a few parents who assumed I had a disabled child and stopped theirs approaching mine, but on the whole the reception was pretty good. Probably because he looked SO FUCKING CUTE in it, right?!

Anyhow. Unfortunately, my son’s period of wear coincided with a petition being launched demanding plagiocephaly treatment be offered by the NHS. I don’t disagree with this (although I understand the complexities behind it), but sadly the petition was pretty poorly worded. It read as though it blamed Health Visitors for the lack of advice given. Now, this is not their fault as far as I’m concerned: they can’t do everything and severe plagiocephaly is rare enough that you’d expect a Doctor to diagnose it, not a HV. They took a lot of flack locally as a result of the whole thing. The press covered it and included the NHS advice on it: that it was cosmetic.

Suddenly I was confronted with a whole host of people who thought I was forcing my son to wear something uncomfortable, or even painful, for aesthetic purposes. They’d done no research past the articles they’d read. I quickly put these people in their place (because, DUH, I don’t take shit when it comes to my child), but I totally see that other parents could feel daunted by this. It was upsetting, but thankfully didn’t happen too often. When I explained the severity of my child’s condition, people soon sat back and shut up. Since then, I’ve been contacted by lots of plagio parents who are nervous about being approached by people with these views. I can’t realllllly help, but all I can say is: don’t be. You know your kid and your situation, and you know what works for you.

9 months after the initial fitting, we took the decision to end helmet treatment. And honestly, I felt a little conflicted about it all. My son’s skull fused, so we’d run out of time for treatment. Given that he’d wonr it for so long, we’d had good value for money! But he’s by no means the owner of a perfectly rounded head.

Social media and case studies are full of helmet success stories, but there are few with severe conditions. Helmet treatment for us corrected a 21mm asymmetry to 11mm: huge when you consider that it is literally reshaping bone. You can now see both of my son’s ears when you look at him straight on. Most importantly, we’re out of medical danger. Any further changes would be aesthetic, so we chose not to continue. If you didn’t know he had a wonky head, you wouldn’t notice, and now that he has hair, it’s covering it nicely. But, fuuuuck, the MUM GUILT. Could I have done more? I know I couldn’t.

I’d have loved for a 0mm asymmetry result at the end of this, but it wasn’t meant to be. When I see social media posts documenting a perfect correction, I feel a pang of jealousy, but I’m pushing myself to see the incredible achievement we did reach. My son finally find his balance, and most importantly, was happy and largely physically unaffected by the condition.

The aftermath of plagiocephaly helmet treatment

Receiving the discharge report with before and after scans made me turn round my thinking on the whole experience. I’ve not noticed the difference because it’s been so gradual, but fuuuuuck, don’t the scans look impressive?! This whole experience gives me an overwhelming feeling of gratitude: to the team at LOC, to the family members who funded the treatment for us, and to my beautiful little boy for being such a trooper through the whole thing. He’s perfect… just a little wonky. Aren’t we all?