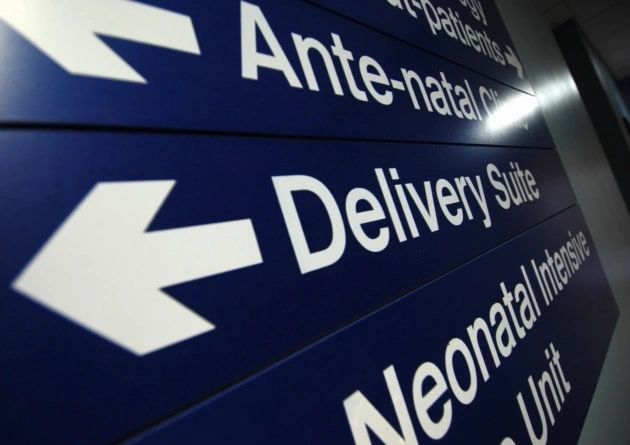 I don’t know why, given the unusual circumstances around my pregnancy, I had assumed that giving birth to my baby would be straight-forward. My life just doesn’t seem to work like that. Thankfully, I can report back now that I found giving birth the most empowering and important experience of my life, and I still carry a huge sense of achievement for having managed it. It wasn’t as horrifying as I had expected (everyone loves to share a horror story with you when pregnant, don’t they?) and although a little ahead of schedule, it was a roaring success for me. I know this isn’t the case for everyone, but I can only share my own experience. And as far as I’m concerned, if you’ve had a baby in any way, shape or form, you’ve done something fucking incredible.

I had just tucked myself up in bed for the night when I felt water between the sheets and considered quickly how to explain pregnancy incontinence to my significant other. I got up, ran to the loo and called him to come up and help me out. I was only 35-weeks pregnant, so had assumed immediately that things were just getting a bit crowded and cramped in there, to the disadvantage of my bladder. Only, when I went to the loo, I couldn’t stop weeing.

I had in my head through pregnancy that I desperately didn’t want to be an overly-fussed preg-zilla who ran to the hospital every week with a different ailment. I knew full well that it is always better to be safe than to be sorry, and that any real concerns should be absolutely raised, but I felt like I’d already been a bit of a problem case and didn’t want anyone to think I couldn’t cope. I know now this is ridiculous, but, as you can imagine, my head was all over the place at the time with both hormones and shock. So, I waited 20-mins before I phoned the hospital. You know… to be sure. (I can’t stress enough how if you’re pregnant, you shouldn’t do this. Call them, take their advice, and head to hospital if they’d like to check you over. You should prioritise your little one, and not your nerves. Anyway, I’m a parent now, so do as I say and not as I do! Don’t be a dick like me.)

Matt immediately knew my waters had broken and upon the minute-long phone call with the Delivery Suite resulting in them telling me to get there as soon as possible, he bundled me into the car. I was still in absolute denial that I would be giving birth any time soon, but he was HYPED. He sang to the radio and rushed me in the doors at a million-miles-per-hour. We were both in shock, but dealing with it in entirely different ways.

The midwives at the Delivery Suite were fantastic at putting me at ease, and didn’t even need to undergo tests to tell me that my waters had broken. They managed not to roll their eyes too much when I told them I had ‘period-type pains’ and confirmed that I’d managed to completely miss the signs of going into labour… and that my pains were contractions, and I was dilated.

I was in labour for 17-hours in total, spanning three midwives (night shift to day shift to night shift), an epidural surrounded by medical students, a intravenous induction, some sleep, some breakfast and lots of chatter with midwives, MCAs, consultants, anaesthetists and students. I gave birth naturally, albeit under the influence of every drug I was offered, after four hours of Pitocin, to Ramsay, who arrived 5 weeks early and weighed 5lbs. He was healthy and happy and had the scream I’d so craved to hear nice and loudly right away.

Of course, it hurt. I threw up, I cried, and I pushed constantly because I had no idea what “push when you feel the need to” really meant. To me, even with a lot of pain relief, it felt like a burning pain and the desperate need to go to the toilet (ironic, given my earlier misdiagnosis from my GP). I found relief in the knowledge that my body knew what to do, even if I didn’t.

The truth is, no matter how much you scream, or poo yourself, or swear at your medical team, the staff facilitating your birth have seen way worse… and even they’ll forget the expletives when they see your gorgeous little person for the first time. Everyone is different and every baby is different – so do what works for you, and remember, once this labour is over, you never have to do it again if you don’t want to! What’s most important from here on in is you and your bubba; and now the adventure really begins. Pass me the coffee.