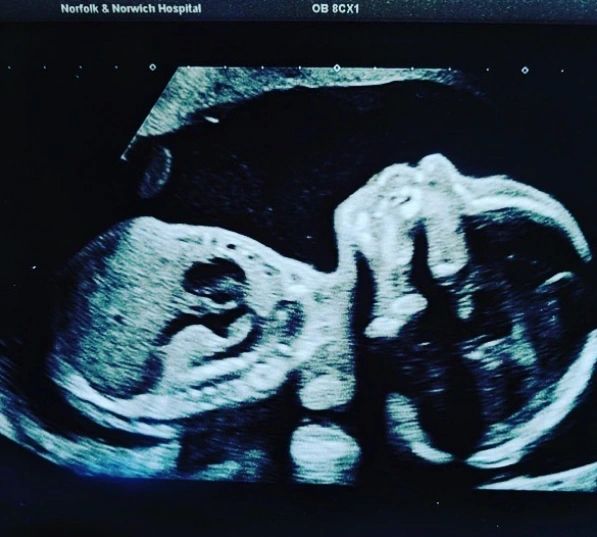 I often get told by people that they don’t believe me when I say that I genuinely had no idea I was ‘with child’ until I was 24 weeks gone. I’ve even had comments that I must not be ‘in tune’ with my body. Well, I’d never been pregnant before, so I don’t have anything to compare it to and I had, perhaps mistakenly, put my faith into a Doctor who had assured me that I was not expecting. It’s not ignorant to believe a medical professional when they give you a diagnosis, and in many ways, it saves you from a life of constant anxiety. It doesn’t save you, however, from pushing a child out of your vajayjay in a fit of screaming pain when you’d thought just three months previously that ­you were constipated. Oops.

I was returning from a three-day beer festival in Scotland (ha!) when I decided that I really ought to nip in and see my GP because I just didn’t feel myself, was a bit bloated, and struggled going to the loo. I should clarify here that when I say ‘a bit bloated’, I don’t mean ‘bulging at the seams with a pregnant stomach’. I literally mean I had some light bloating; and I was a size 8 at the time (sigh) so it wasn’t much more than the shape of a full belly after a big meal. I’d had bigger post-Pizza Hut buffet. But it concerned me. I wanted to look like a supermodel, even if I’d never have the face, tits, or restraint from fast food to go with it.

As I imagine is the case with most people, I don’t see the same Doctor every time I go to my GPs, but just snap up an appointment with whoever I can, whenever I can. I was assigned to a Locum and toddled off into his office to moan about my lack of toilet activity and the fact I was losing my figure. Now, as any sexually-active female will tell you, you can tell a Doctor you’ve broken your finger and nine times out of ten (this may or may not be a made-up statistic), they’ll ask you if you could be pregnant. This Doctor, instead, looked at my notes and mentioned my being-on-the-pill before undertaking a full abdominal examination and informing me I had a blockage in my digestive system. A months’ worth of industrial-strength laxatives were prescribed and I was told that if in 24-hours my shit-uation hadn’t resolved itself, I was to go to hospital.

The next morning as my significant other left for work, he mentioned that my top was wet. It looked like my boobs were leaking. I of course immediately told him he was being stupid (ugh, MEN) and waved him out of the door. I had, obviously, just dipped my boobs in coffee. Accidentally. Without realising.

So as soon as he’d left the house? Yep, I googled. This fruitful search told me that either I was pregnant or I had a cancerous tumour requiring immediate attention. Either way… Oh. Shit.

Running, or at least, walking as fast as I could without my tits resembling Austin Powers-esque Machine Gun Jubblies in public, to Boots, I picked up a can of Red Bull (it was 8am, opening time) and two pregnancy tests. To say the cashier, who I can only assume was on work experience and had never actually looked a female in the eye before, was flustered would be an under-statement, but then, so was I. I jiggled off home to pee on the sticks. Not before necking the energy drink, of course; choosing to ignore the label on the back that has a cross through an image of a pregnant woman. After all, I wasn’t pregnant. Definitely not. Just constipated.

While crouching over the loo pissing on the second stick in a row, there’s one thing you probably shouldn’t do – and that’s Whatsapp the father to tell him you’re having a baby. I did just that. So what if he was at work? THIS IS ALL HIS FAULT. To his credit, he came straight home to calm me down, which was no mean feat.

We returned to the GP that evening (which you know, is where I love to spend my Friday nights), where I demanded a new test and resisted the urge to scream at the Doc as he smiled. I felt unnecessarily awkward enough that I was sat between the man who had shoved his finger up my arse a day prior; and my boyfriend. He nodded that I was, indeed, pregnant. Upon seeing the shock on my face he informed us that if we required a termination, we should call back on Monday. With that, my other half picked me up off the chair and marched me out of the surgery altogether. And thank fuck for that.

Now I won’t act like I wasn’t terrified at being told I was expecting. It’s scary, and whilst I wasn’t planning on having a child, I imagine it’s just as daunting for those women who have spent their whole lives wishing for one. I had no idea where to turn, what to do or who to talk to. And this is where the angels that make the birthing experience for most of us came in: the midwives.

To describe midwives as guardian angels is far, far understating their roles. The community midwife team where I live swept me up over a weekend to call me and counsel me daily before ‘checking me in’, checking me over and arranging a scan to confirm that I was having a happy, healthy little boy. They didn’t need to lift my top to tell me I was pregnant, didn’t raise an eyebrow at my likely-ridiculous questions and did nothing but make me feel like a princess throughout the early days of my knowing I was carrying. The first midwife we saw felt my bump and told me she was pretty sure I was 24 weeks gone, a fact confirmed by a sonographer as soon as I had a scan. Nothing was too big or too small to talk about with my team of community midwives, and for that, I’ll always be grateful. I don’t know how things would have panned out without them: their support was invaluable and ensured me the best possible start in pregnancy. I had drunk alcohol, flown in a plane, eaten every forbidden food on the list and been tattooed in the previous six months. Did they judge me? No. They reassured me when I needed desperately to hear that everything would be OK.

We walked out of our first scan in a blur. Unlike the majority of scans you see on Facebook, this was a very visible little person, not just a blob on a black background. The gender was evident right away and upon hearing that our little man was healthy with no foetal abnormalities, our minds were made up on what to do next.

Our lives had irreparably changed in a way we’d never imagined in the space of few days. Now, the adventure would really begin. Time to phone our Mums…