Dog, meet Baby. Introducing our Staffie to our Son 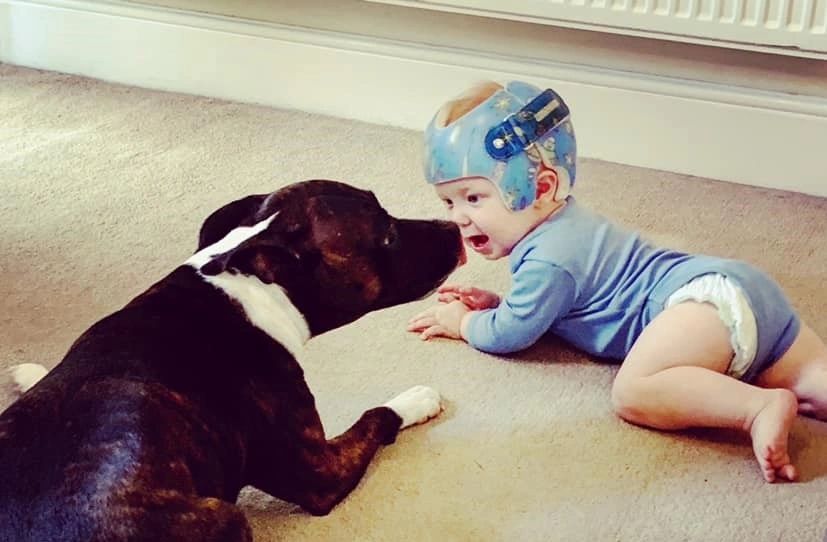 Elle isn’t the best trained dog in the world, but neither is she particularly naughty. She does fully believe she’s a human princess, and enjoys nothing more than snuggling on the sofa watching TV, but still… she’s a dog. And I was nervous about having a dog in the house around a baby. Which I’ll go ahead and assume is an entirely normal viewpoint.

We sought advice almost right away from a local pets group who we knew worked with a lot of Staffies, and they passed on the Kennel Club Advice for introducing dogs to new babies in the household. Although I knew my dog was gentle, I was nervous. My mental state was already totally in disarray and so I wanted to follow the instructions to the letter, and if anything, with some extra caution.

Before, and Bringing Baby Home

We very quickly had to buy a whole heap of baby shit, and let Elle sniff about all of it as she pleased to make sure she knew what the new things were and where they went. We also taught her pretty quickly that none of it was hers, and that although she could sniff it all, she wasn’t to paw it, lick it or sit in/on it. All of her worming, flea and vaccinations were already up-to-date, so we didn’t need to take any action there – but it’s recommended if not.

Elle went off to my partner’s parents when I went into labour so she wasn’t home alone or confused, but when we did finally bring our son home, we didn’t ship her straight back in. Deep in the haze of the anxiety, sleep deprivation and confusion that having a newborn brings, we settled back into the house with our new bundle of often sleeping, sometimes screaming, joy for a week dog-free.

When Elle ran back into the house after that week away, I made sure to be the one to greet her as soon as she came through the door, and gave her lots of fuss and attention. She spent a good few minutes sniffing me (particularly my stomach, which grossed me out a bit because the kinda empty ‘flop’ a shrinking bump felt like for me was noooot pleasant), and then in walked my babydaddy with my son.

I was totally on tenterhooks but… she took two sniffs of his head and trotted straight off. It was although she already knew who he was and knew he should be there (and I guess she did, she’d been cuddling him in my tummy all along!).

In the following few weeks, we gave Elle treats and toys for staying away from the baby but to be honest, she wasn’t really looking to touch him or play with him. She liked to lie near him, and look at him while he laid in his moses basket or in our arms, but seemed to know he was fragile and didn’t push it. When I read him a bedtime story, she’d sit at my side while he was on my front, and when I woke up in the night to pump, she’d get up and sit with me. If it was baby bottle time, no matter the hour, she’d sit at the feet of whoever was feeding him.

Elle continues to be protective of her baby brother but the dynamic really changed once he started moving around. We had a baby walker before he could actually take steps by himself, and he used to literally chase Elle around the house with it. She was muuuuch more nervous than he was about it (duh, because there’s a giggling snotty child attempting to smash into her with a giant rig of plastic) but she definitely became more aware of him being a proper little person as opposed to just a wriggly baby once he became more mobile.

To walk Elle, I brought my son along in a carrier initially, and now, she will pretty much only go for a walk if he’s with her (although she’ll walk to pick him up from nursery, as she knows exactly when he’s due home and will basically walk us all the way there to get him!). He’s a verrrrry active kid and I’m not much of a fan of holding a toddler in reigns in one hand and a dog on a lead in the other, so we tend to walk the pair of them as a couple and make a little family adventure of it – even if it’s just around the block.

It sometimes feels like a big deal and a faff to try and arrange everyone to get out of the house all at once, but it’s great once we’re out and forces some family time together, even if just for ten minutes on an otherwise hectic day.

We continued to use the ‘include, don’t exclude’ rule. This rewards Elle for not touching his toys and approaching him gently, and it seems to have worked. Now my son is two, the pair of them will play together – but often because it’s difficult to get a toddler to not touch dog toy. Elle still has her own toys and blankets that are separate, but she drops them if there’s a pink squishy hand on them.

More often than playing together, they snuggle together; and every night in front of the CBeebies Bedtime Story, they sit as my son drinks his bedtime milk. In the daytime, she acts as an occasional cuddle buddy but more often as a car ramp, a recipient of food prepared in the play kitchen and a very willing meal-time companion. Bonus: there’s no need to worry about food being thrown from a highchair to your carpets when there’s a willing canine hoover to remove it all! We still don’t ever leave them together without one of us present, but I wouldn’t be overly worried now if they were together for a few minutes at a time. I’ve only once caught him with his fingers up her nose.

The two of them have a lovely bond now, and my son adores dogs. I wasn’t raised around dogs so before I had one I was a little cautious of them. Seeing the pair of them together now and seeing my son’s fascination in all animals seems really special. The introduction we made worked brilliantly for us. I’d do it all again… but don’t get carried away. It wouldn’t be with another baby. But another dog? I could be tempted…